Hoang Thi Kim Dung,  35 years old (Nghe An , Viet Nam) made a big decision: using her dead husband’s sperm to conceive a child despite the objection from her family and friends.

Distance cannot stop love.
It’s hard for her to believe the fact that her beloved husband had passed away. Six years since his death, many things have changed but her love to her husband still remains alive.

Dung is a small and graceful woman . Years passed but she could not stop grieving.
Her husband  is Ho Sy Khoa, coming from the same town as her. They are  the same age, went to the same high school but at that time, were just acquaintances.

After being admitted to  Ha Noi Technology University, they had been in the same year but different class. Leaving the small town to a big city for studying, they were happy to know each other. Like other students, they also had many unforgettable memories when they were still sitting at the university. The more they spent time  together, the more they adore each other. 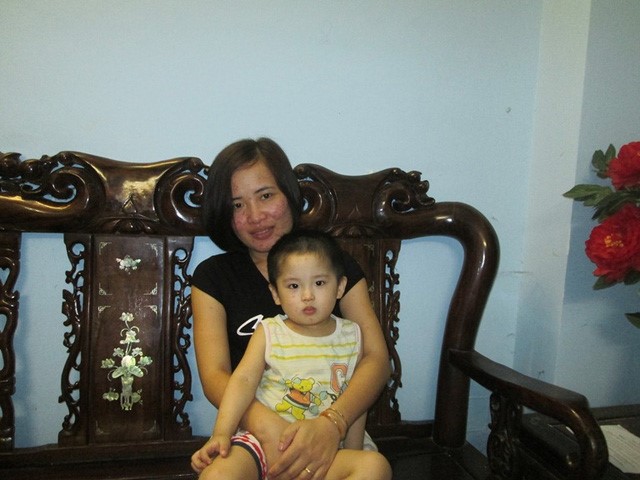 Mrs Dung and her son who was born using  sperm collected from his deceased father.

They started dating since the third year of university, they are the other’s first love. At that time, their love was admired by a lot of friends. He is an excellent student of the department, she is no less brilliant and also very beautiful.

After graduated, she decided to study abroad, in France, majored in aviation space. He had never stopped her from realizing her dream and decided to wait for her return. They dreamed of a happy family after having a successful career.
7-year-love story but five years of long distance love, they finally had their wedding  taking place in Nghe An, Viet Nam .
She told : “He was quiet but thoughtful. Every time I got tired or stressed by studying pressure, He often cracked jokes to make me laugh. When I couldn’t come home, he always dropped by my family then informed me about my family”.

After  half  year of marriage, Dung had to go to France to finish her study. At that time she was pregnant, she proposed her professor to help her finish her study sooner so that she could come back home in time to give birth.

They were overjoyed to have a baby girl. Their future was wide open with so many promising plans. However, their happy days could not last long. A sudden accident had  taken  the father  from  the 6-month-old daughter, leaving his young widow behind.

When he was alive, they expected to have more children. To make her husband’s dream come true, she had  the South and Infertility hospital doctors to operate and take 14 samples of sperm from her late spouse to preserve.

During her time abroad, she has ever read about the sperm preservation of the  dead. In the beginning, she supposed that there was not the technique in Vietnam.
Surprisingly, she conceived  twins. She got a little worried because in the future she has to take care of three children by herself but overall she was very happy.

When her daughter got a little bit older, she decided to get in vitro fertilization using the sperm of her late husband. Fortunately, she succeeded in the first time. Because of her work, she did not have much time resting as recommendations of doctors. Luckily it did not affect the baby.

She said “ When he had gone, she supposed that she must have a son for him to continue the family line. That’s why I try to meet some doctors.”

When Mrs. Dung would like to preserve his sperm to create the baby, her family felt nervous because they are worried about her.  Her friends thought that just one child suffering from the death of her father is enough. However, she still kept her decision.

Now in a small flat of Phap Van urban center (Hoang Mai district, Ha Noi), the laughter of the twins is the best answer for this case. 3 –year- old twins are healthy and smart. On the first days, it’s quite hard for her to look after her son and daughter. But now everything is going to be fine, she is able to manage to make her life better.

Love story of the king of the happiest...

Tips to become a good wife